Barely a year and half later, on the 20th of January, 2018, my buddy Maxime surprised and honored me by appointing me co-webmaster for Tombeau Croft. My childhood dream came true. Although I thought things could not possibly get any better at this point, I was proven wrong as a series of unexpected and awesome surprises happened throughout the year. I wanted to write an article summing up my and Tombeau Croft’s highlights in 2018. Most of these things would have never happened had it not been for Maxime or you, dear readers.

My promotion as an official Tomb Raider Discord moderator in March 2018.

For those of you who don’t know about Discord, it is a free instant messaging app well-known amongst gamers. A few weeks after I joined the Official Fansite Programme as a fully-fledged webmaster, the program members from all around the world were invited to the newly-creating, then still under-construction, Discord server dedicated to Tomb Raider. Thanks to my experience, I was able to provide help to Morrigan Johnen, community manager for Crystal Dynamics, in setting up the server and moderating tools. Although I was not expecting it, she rapidly contacted me by mail and offered me a position as moderator as the server was opening to the public. None of this would have happened had I not been welcomed in the programme shortly beforehand. If you want to discover the Discord server and meet fans from all around the globe, click on the image below.

The shock, the dream of every gamer, the most unexpected event of my life so far. In May 2018, during an otherwise uneventful evening, I received a mail that made me hysterical for nearly 30 minutes. Meagan Marie, Senior Community Manager for Crystal Dynamics, contacted me to tell me that I was invited to the Electronic Entertainment Expo, the yearly world’s biggest videogame convention. Shadow of the Tomb Raider was to be featured there, and a booth dedicated to the game would be set up, to introduce for the first time the new game to a large audience. For the occasion, I was able to honoured the French community with my good friend Quentin from « Pilleurs de Tombes », we were allowed to demo the game and give our impressions during and after the trip. I had the immense privilege to meet other webmasters from all around the globe and meet important personalities from the community, which was the icing of the cake. Nothing will ever compare to the euphoria I felt and my gratitude for having had the chance to live all of this. If you want to (re)discover our article about E3, from 2018, click on the image below. 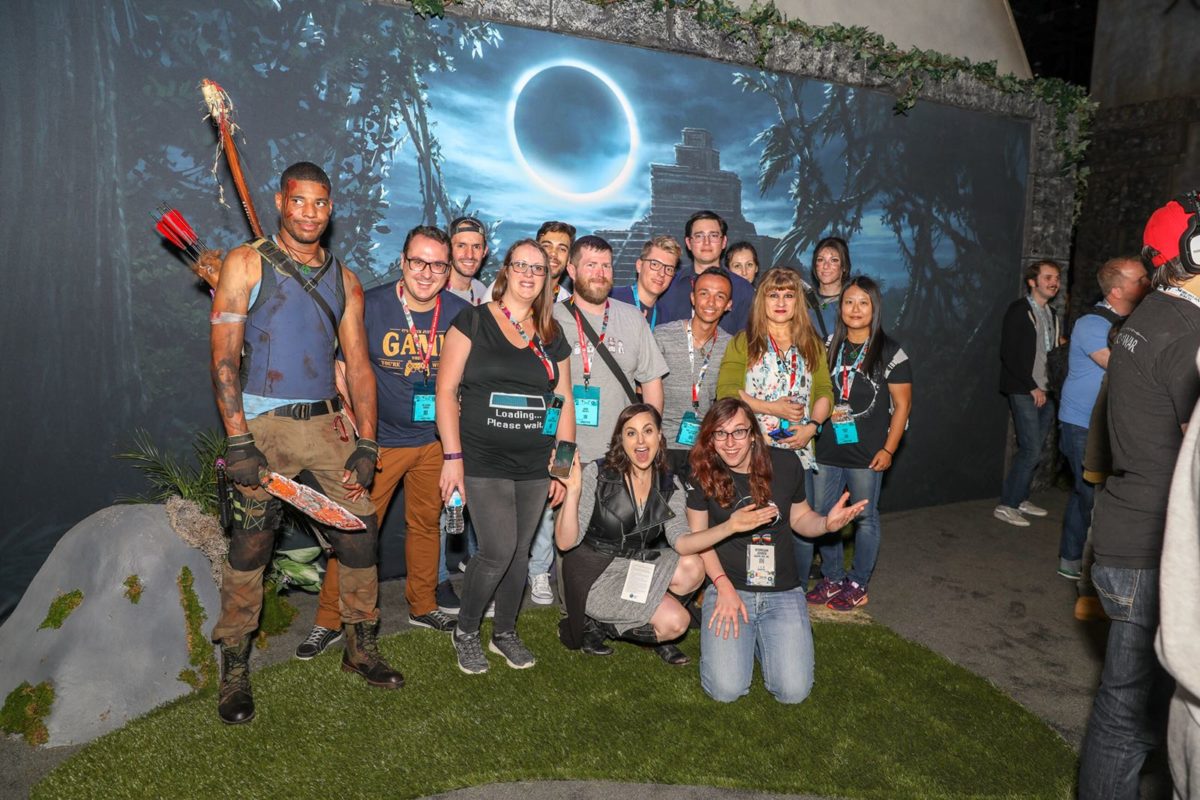 The Shadow of the Tomb Raider press event in Paris, in August 2018.

A month before Shadow of the Tomb Raider was released, every webmaster in France was invited to Paris for a press event and to demo the game during a whole afternoon. The preview demo lasted for 4 hours, and we were allowed to share a 30 minutes long video on each of our websites ! Even though I already knew some of the french webmasters, I had the great pleasure to see new faces. All of them, with no exception, accepted and integrated me in their group. For that, I am extremely grateful to all of them and I really appreciate them!

If there’s one thing I can say with enthusiasm and assurance, it’s that my journey with Tombeau Croft will not end this year. Never in my life have I been blessed with so many opportunities and it all is thanks to my position as webmaster here and I owe it all to Maxime and our faithful community. Everything I’ve lived during the year motivates me to create more for the website, along side my dear friend.

I already have a few ideas for the website for the coming year : for starters, I intend to focus even more on the franchise’s community, seeing so many skilled people pursuing their passion with the game makes me want to give them a voice and I would like to highlight as many of them as possible!

Secondly, one of my biggest objective, one that I have had in mind for long with Maxime, is to create a new category for the website called « Testimonies ». This new section will allow fans to share their stories about the franchise such as how they were introduced to the games and how it influenced their life. It will certainly be tedious work, but if Lara was able to survive Yamatai, I’m convinced we can do this as long as we work together!

Finally, I have a big passion for our favorite archeologist’s native language, as such, I want to create more content in English for our readers from across the seas. Yes, my obsession for English (and probably my crazy personality too) is driving me to make my work available for anyone willing to read it, be that in France or anywhere else.

If you want, you can explore our « Community focus » section to read our previous articles focusing on the talents within the fandom. Some of those articles are available in English!

A crazy year. Unforgeable adventures. Great projects and a lot of motivation for the future. An endless gratitude. This is how I can summarize this article. My journey with Tombeau Croft is clearly not coming to an end any time soon and I hope you, dear readers, being my main source motivation, are ready to follow me for 2019.

I’ll see you all soon for another article! 🙂
Hedi.